The Phi-Phi group of islands is located 46 km east of Phuket. This is one of the most striking places in Southeast Asia. High limestone hills rising from the turquoise waters. The sites around the Phi-Phi Islands are famous for their colorful soft corals, a variety of marine life and comfortable diving conditions.

This area is a national park, so only certified divers are allowed to dive. For diving near the Phi-Phi Islands, a park fee of 600 baht per diver, 400 baht per snorkeler is charged. Some of the best diving spots in the area are Bida Nok and Bida Nai, just 2 km south of Phi-Phi Leh Island.

Bida Nok Island is considered one of the best diving spots around the Phi-Phi Islands. Its uninhabited slopes, below the surface, are covered with a huge array of soft corals and colorful anemones. In the south of this small island, there is a well-protected bay, which is convenient to start diving in any weather. The bay is not deep, from 5 to 10 meters. Blacktip reef sharks can be found near rocks in shallow water. There are also sea snakes, cuttlefish and schools of squid.

On the western side, the reef descends with a sheer wall to a depth of 20-25 meters. The walls of the reef are covered with gargonaria, bright anemones, tubular corals. In the crevices of the reef, you will find various shrimps, nudibranchs, white-eyed moray eels. Here you can find octopuses and well-camouflaged stone fish. Stingrays are found in sandy areas.
The visiting card of this site is huge flocks of yellowback fusilier. You are literally lost in a cloud of goldfish. You can also meet large flocks of Great Barracuda and witness the lively hunt of Giant Trevali. Sometimes turtles are found here. The bottom is dotted with sea urchins, blue starfish and sea cucumbers.

The eastern slope of the island is gentler with a wide variety of reef fish. Here, on a sandy bottom, you can see a leopard shark, and near a rock in shallow water, a blacktip reef shark.

There is a small cave on the north side. The cave entrance is at a depth of 20 m and the wall is covered with colorful soft corals and gorgonians.

As you climb up after a spectacular dive, you can enjoy the beauty of the island from the surface. A steep cliff with picturesque greenery, over which eagles circle, will not leave anyone indifferent. 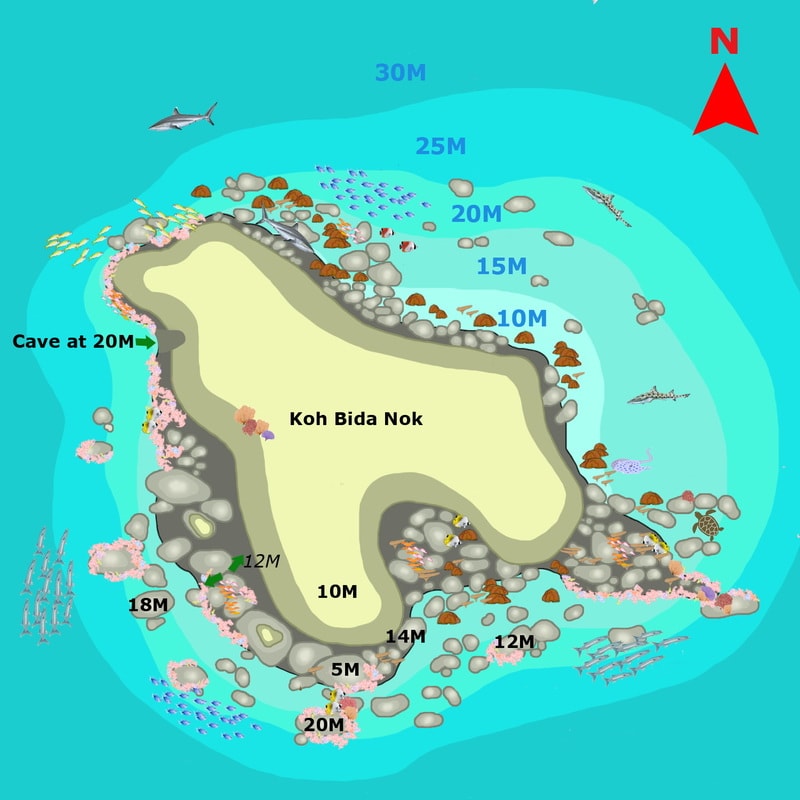 Bida Nai is an uninhabited island located 2 km south of Phi-Phi Leh. Along with the island of Bida Nok, which is a hundred meters to the South, Bida Nai is considered one of the best diving spots near the Phi-Phi Islands due to the abundance of underwater life.

On the surface, the limestone rock is stunning with the white and red shades of the mineral formations. The rock is surrounded by eagles and swallows.

Most divers start their dive on the south side of the island using the descent line. Underwater, hard corals form an arch filled with the Glass Fish School. A breathtaking coral garden opens up behind the arch. Fish of the scorpion family are often found here, so you need to carefully control your buoyancy. Life is in full swing in the cracks of the reef. Here you can find various shrimps, moray eels, nudibranchs. The most observant can spot ghost fish and seahorses.

Nearby, heading southeast, there is a 3-peak dais called Fantasy Reef. It is an interesting place with very rich coral formations and marine life. Here you will find an abundance of Sea Fan corals, Sea Whips, as well as vase-shaped soft sponges along which flute fish, Paffer Fish and schools of Sneppers soar. You can also find flocks of squid. Giant Trevals, flocks of Barracudas and tuna fish hunt over the reef for a breathtaking sight.

On the Eastern side, the slope is gentle, from 7m to 25m depth, with a sandy bottom and small coral banks. This wall is covered with colorful anemones with clown fish living in them. Here you can find all the variety of the Andaman Sea: titan triggerfish, angelfish, emperor fish, parrotfish, lionfish, moray eels, leopard shark. Bamboo sharks can be found in the shallow water at the base of the rocks.

The Western side of the island is less visited. Usually, they do a drift dive from north to south or in the opposite direction, depending on the currents. 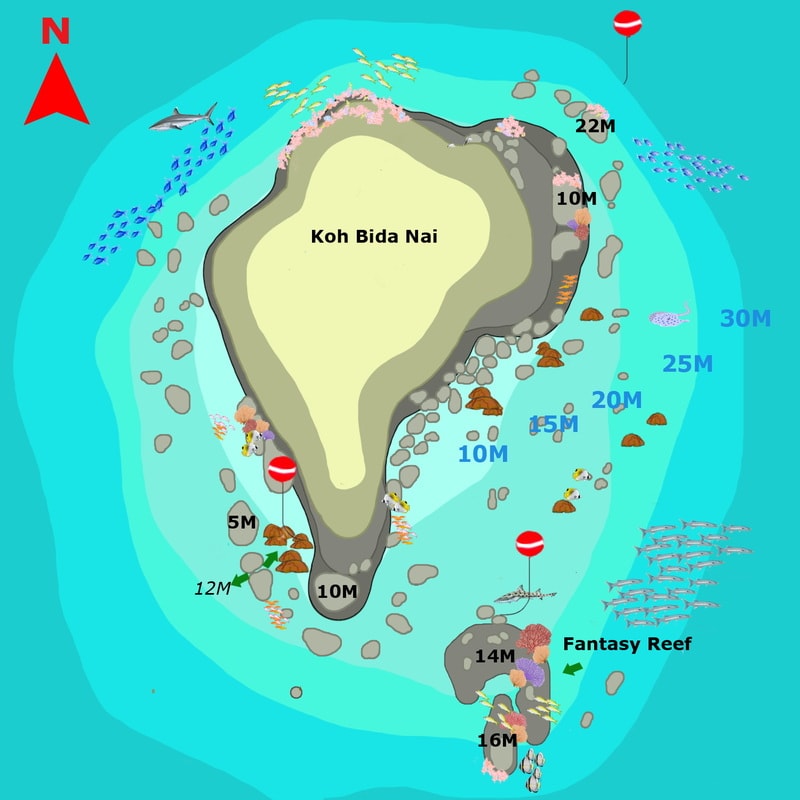 Palong is a cove located on the Western side of Phi-Phi Leh Island. The bay is made up of massive limestone boulders that descend to a depth of 18 m. Sheer steep walls merge into a sandy bottom, on which stand-alone reefs are scattered, covered with a wide variety of soft corals. Diving at this site is usually done along a shallow wall. It is here during a dive that you can meet a dozen blacktip reef sharks. They reach a length of up to 1.5 m, are very shy and do not pose any danger to divers. In almost every dive, divers meet Giant Moray, Great Barracuda, Parrotfish, Trumpetfish. 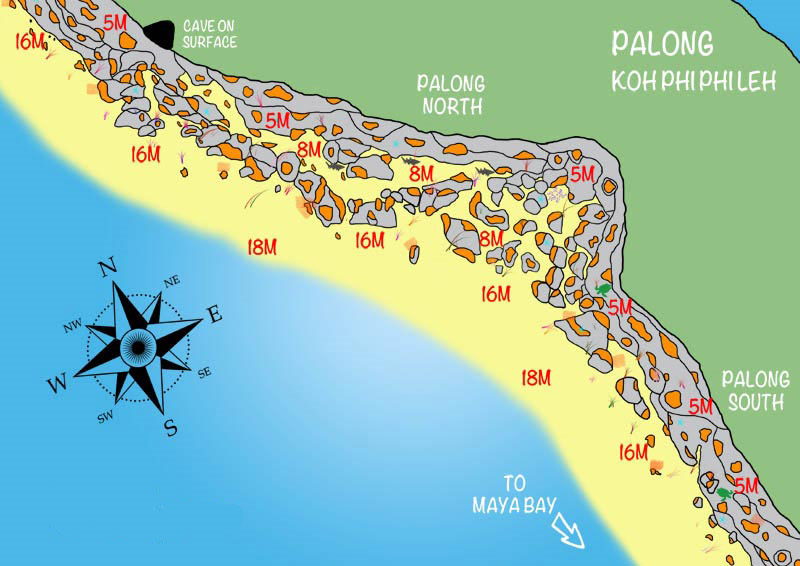 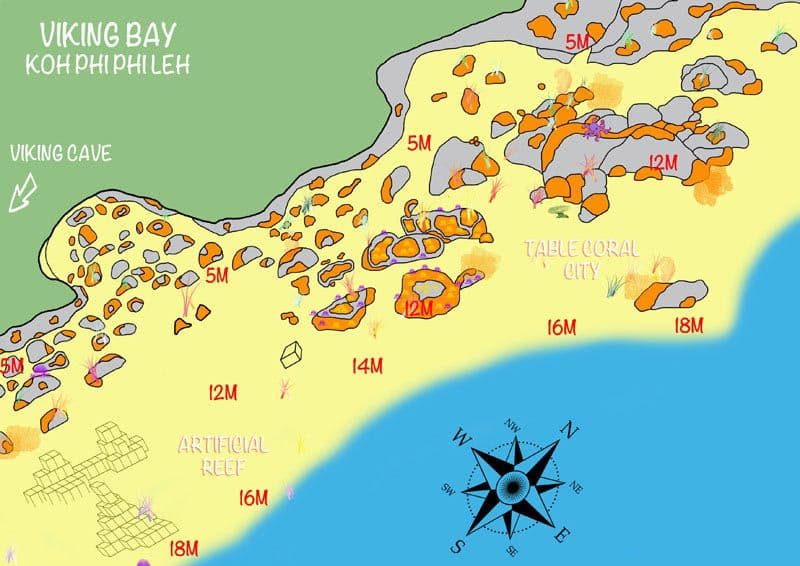 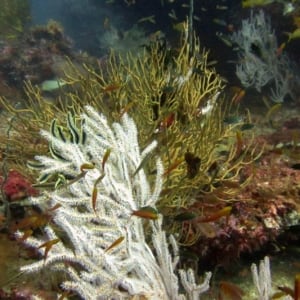 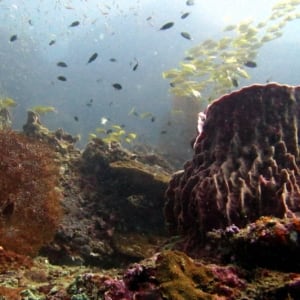 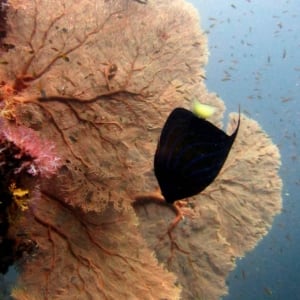 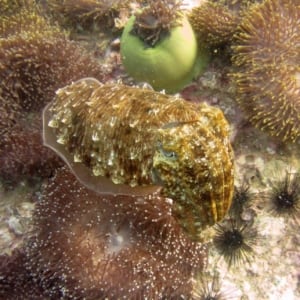 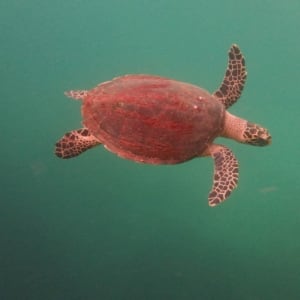 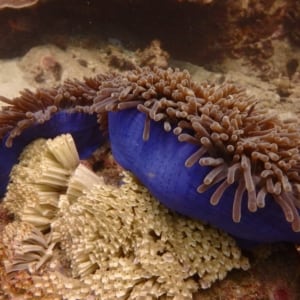 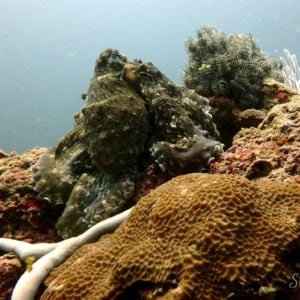 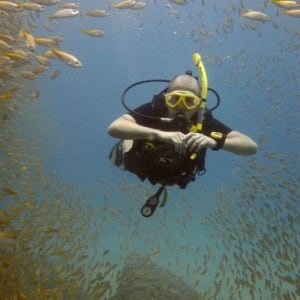 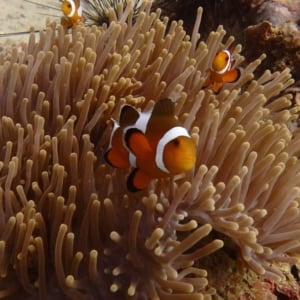 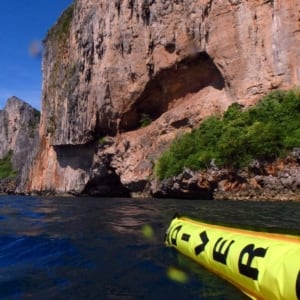