Racha Yai Island is the most popular diving and snorkeling destination. The island is surrounded on all sides by bays with white sandy beaches and crystal turquoise waters. Diving sites are varied and will be interesting for both advanced divers and beginners.

Gentle sandy slopes and no currents are ideal conditions for a PADI Open Water Diver course or a PADI Discover Scuba Diver test dive. For certified divers who have not dived for a long time and want to reclaim their skills, this is a great place to check-dive.

On the east side of the island lies the deep Bungolow Bay, which remains calm in all seasons and weather. Both sides of the bay are suitable for divers of all levels.

On the northern side, the bay is a reef slope with a depth of 5 to 25 m, represented by various types of hard corals (Hard Coral, Brain Coral, Table Coral), which turns into a sandy bottom, on which an artificial reef in the form of cubic structures is installed.

The site is flatter on the South side. On the sandy bottom, 9 m deep, there is an artificial reef that resembles the eggs of space aliens. Natural reef banks are also found. Heading along the south side, the reef slope and the Funnel Coral hard coral fields appear. At the exit from the bay, the slope becomes rocky, steep, the depth reaches 25 m.

In Bungolow Bay, stingrays, moray eels, parrot fish, and snappers are often found. You can see octopuses, cuttlefish and squid flocks. Macro lovers will appreciate the abundance of nudibranchs and shrimps. Turtles can be found on the north side. 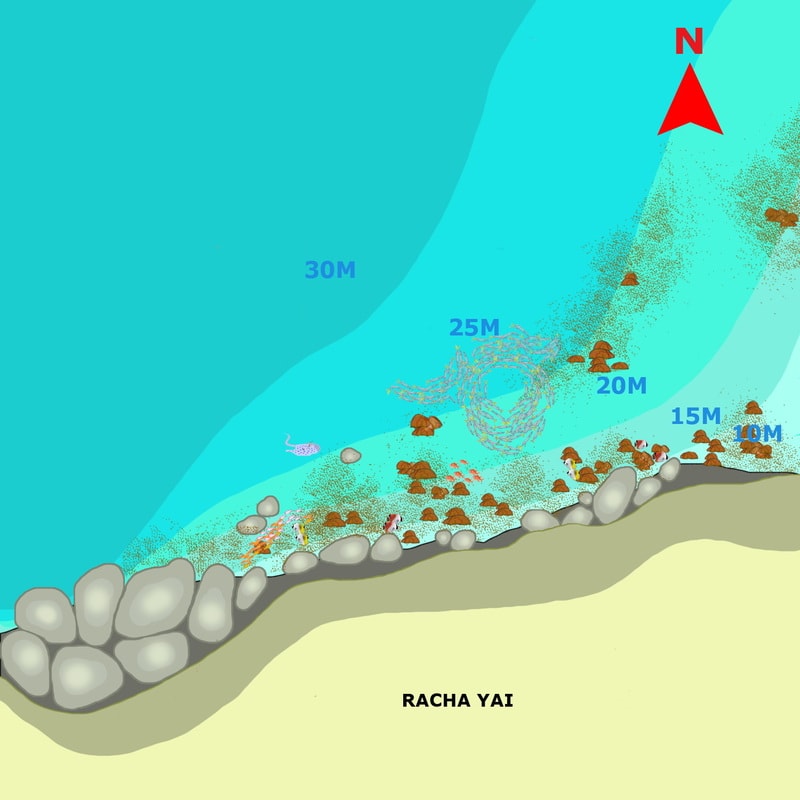 Siam Bay is located on the North side of the island. A gentle slope with a depth of 6-12 meters is an excellent place for students and beginners. The bottom is sandy with scattered reef banks.

Heading north, you will see a solid coral carpet. After passing it, at a depth of 20-25 m you will find life-size statues of elephants. After the 2004 tsunami, a memorial was erected here in the form of a composition, which was a seashell with a pearl, guarded by two elephants and two guards. Unfortunately, the forces of nature did not preserve this beauty and today the whole composition is scattered on the sandy bottom. 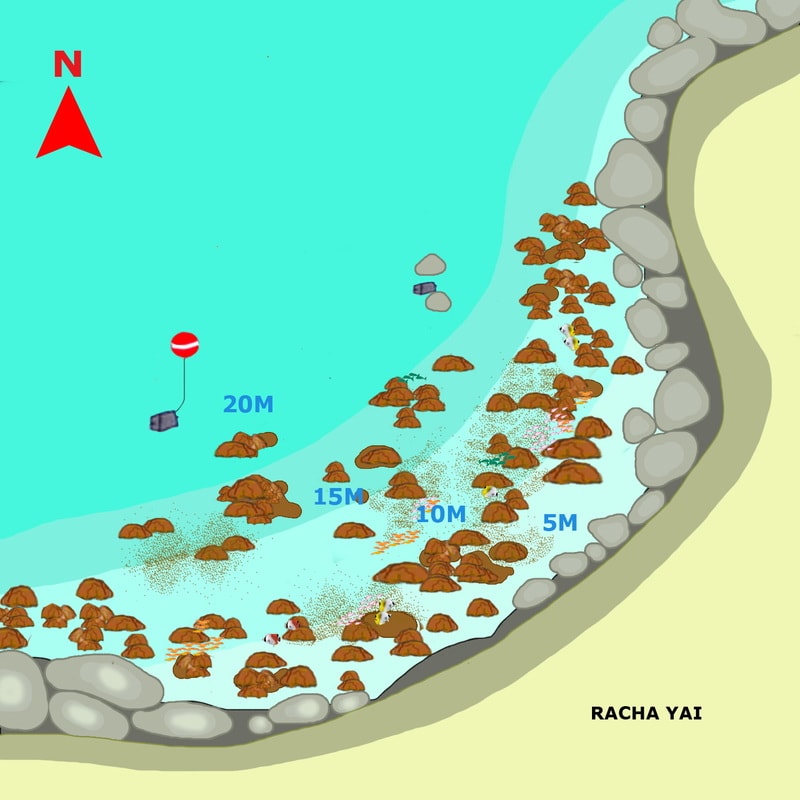 The eastern side of the island starts from the Homerun Reef dive site. The reef drop-off begins at a depth of 5 meters. The steepest slope is at a depth of 12-15 m, the rest is 15-25 m, which ends with a gentle sandy bottom. On this site, dives are usually done in one direction. The boat picks up the divers in the direction of travel.

Most of the reef is covered with hard corals such as Staghorn Coral, Brain Coral, Pore Coral. Reef fish such as Parrotfish can be found here. Trumpetfish, snapper schools, and barracuda are common. You can meet the Great Barracuda. Looking closely under the reefs, you can find octopuses, moray eels or sea snakes.

At the southern end of the reef, at a depth of 24 meters, there is a submerged boat. It is small and easy to miss. While there are not many corals on it, it attracts a large number of fish. Looking around, you can see stingrays. 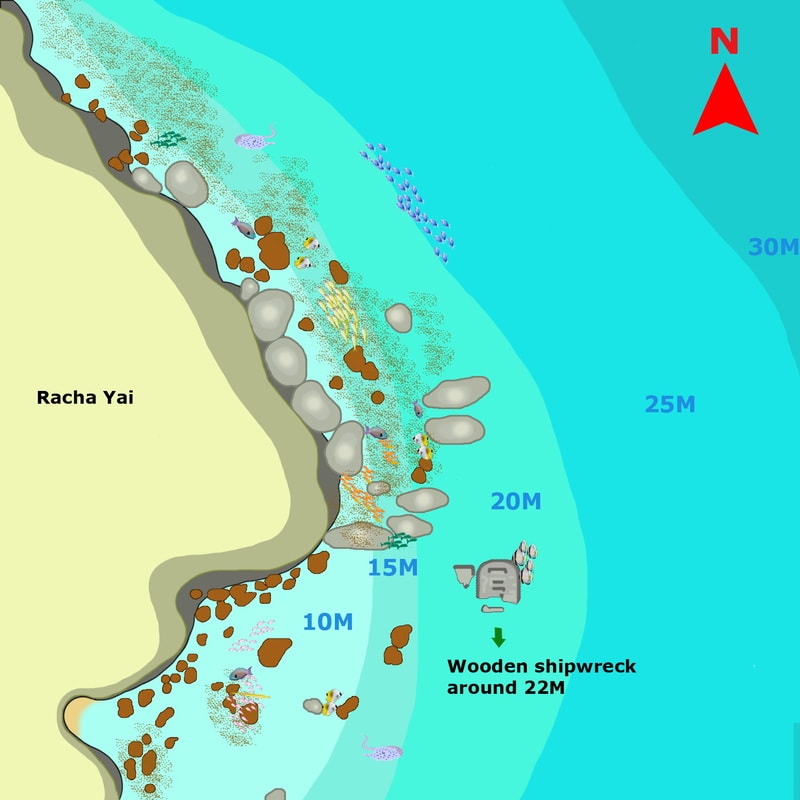 Bays 1 and 2 are located in the northeast of the island. These are the most popular diving and snorkeling spots. Quiet bay with a gently sloping sandy bottom, which slowly descends from 5 to 25 meters. In shallow water, the bottom is dotted with reefs surrounded by a wide variety of fish such as Parrotfish, Giant Pufferfish, Masked fish, boxfish and many others. Here you can find various types of moray eels, cuttlefish. Large flocks of small barracudas are circling around.

There is an artificial reef wall at a depth of 10 to 15 meters. Flooded cubes stacked in several rows, which is an interesting place for beginners to dive. The constructions are beginning to grow over with a living reef. Moray eels, scorpion fish, Pufferfish, Batfish settled here. Here you can also “ride” on a flooded bike and take photos of the format — to the envy of your friends!

Head further East and you will see the wreck Harruby Liveaboard. The vessel lies at a depth of 14-18 m on the upper deck and 20-24 m on the bottom. This makes it affordable for all levels of certified divers. Here the good-natured Batfish found their home. There are also Great Barracuda, Scorpionfish, Giant Anglerfish. 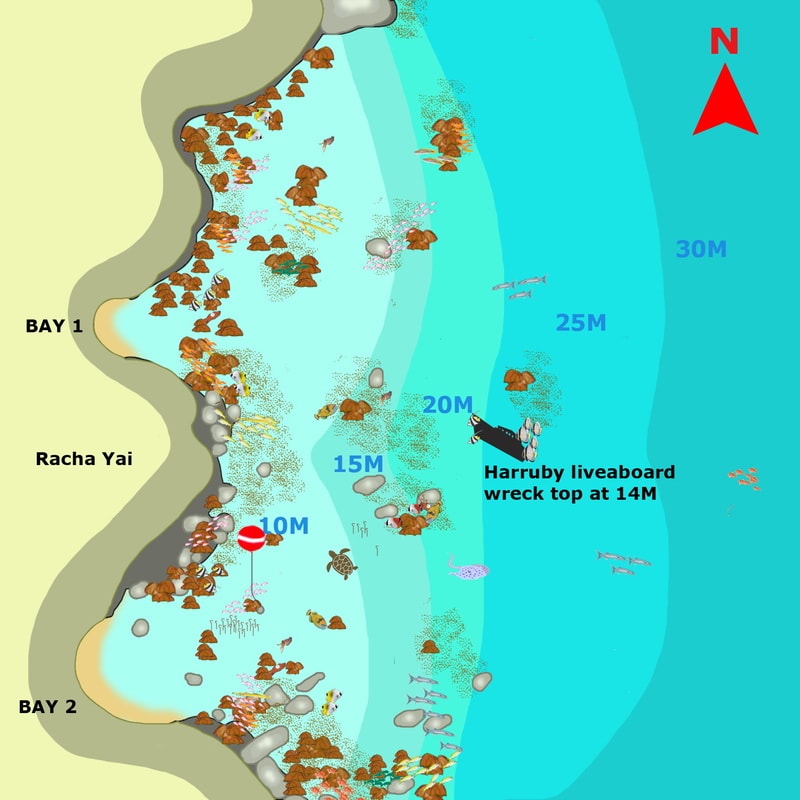 Another very popular dive site for the same reasons as Bay 1 and 2. About 20 meters away there is a cluster of concrete cubes that form an artificial reef. Moray eels, Batfish, Lionfish and a wide variety of other reef fish live here. Heading south, rock formations begin. Eagle rays are sometimes found here. White sand and clear water create ideal conditions for underwater photography. 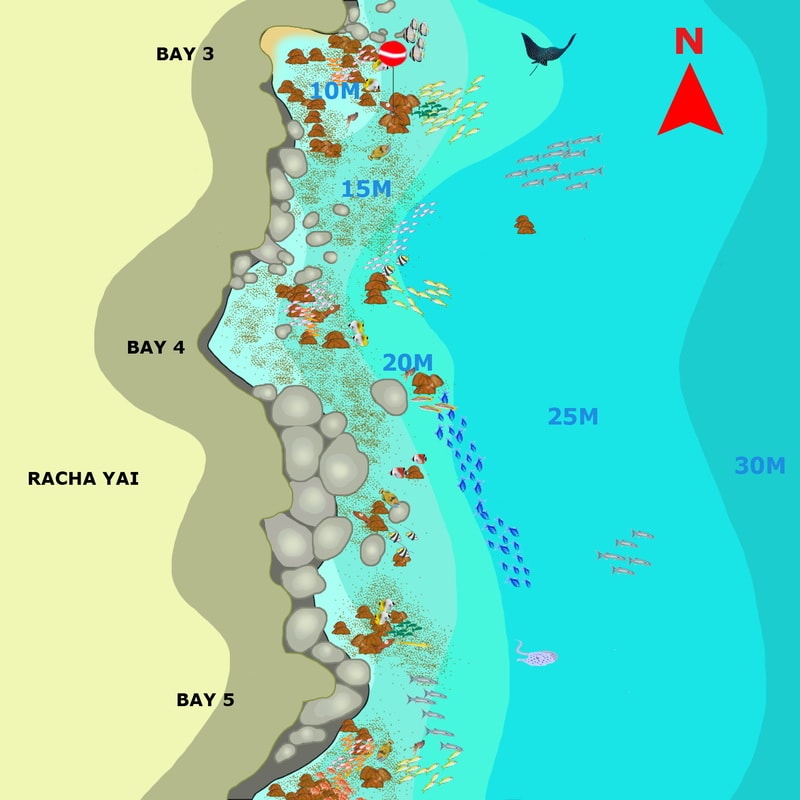 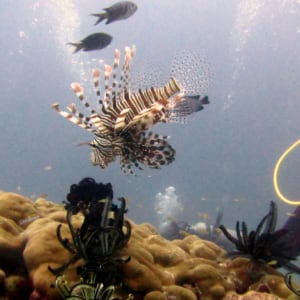 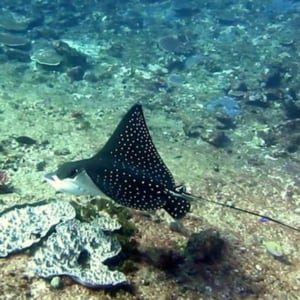 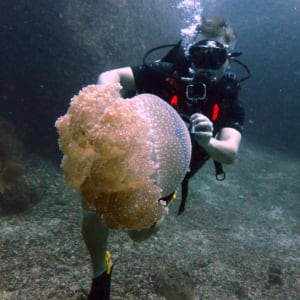 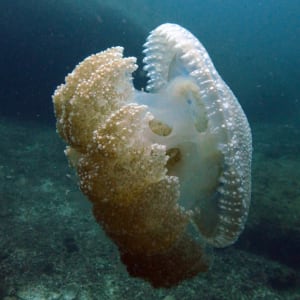 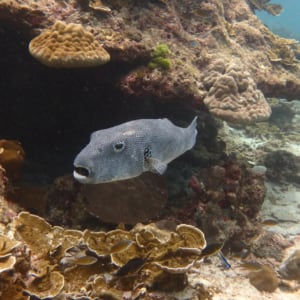 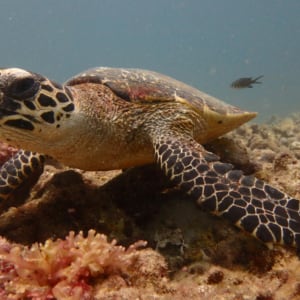 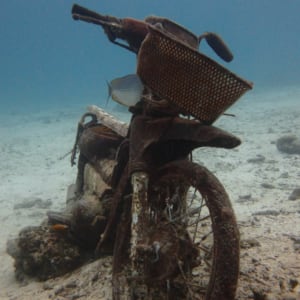 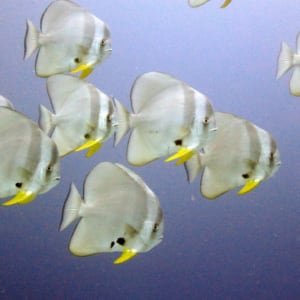 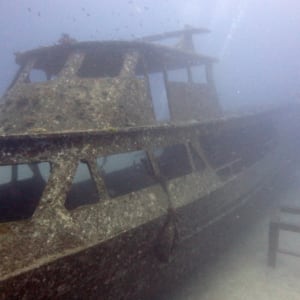 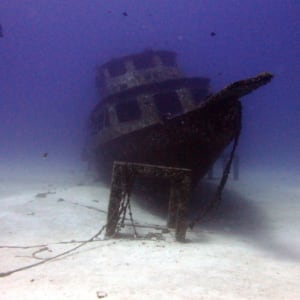 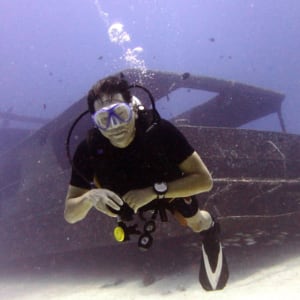 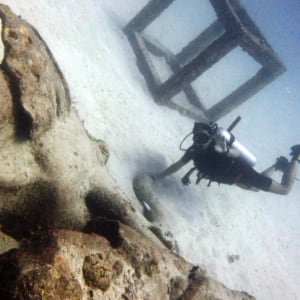 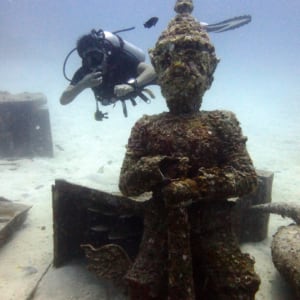 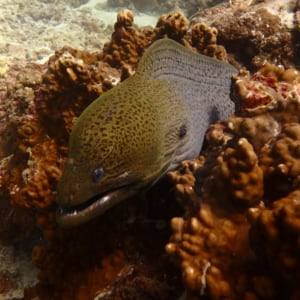